Home > Caring For Children > I Left a State Nursery for a Private One: Case Study 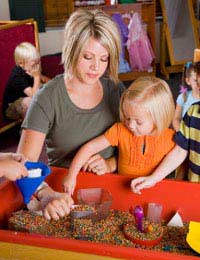 At a time when public sector pensions are being discussed on the news almost as much as the unemployment levels, people changing jobs can be few and far between. Sometimes we feel as though we should just ‘grin and bear it’ and be grateful to have a job at all.

But for Christine Marshall, the thought of staying in a job that she no longer liked, just because of the so-called ‘gold-plated pension’, filled her with dread. So she decided to do something about it.

Christine explained, “I always knew that I wanted to work with nursery-aged children, so after I completed my training I applied to work at the local nursery. It was attached to a very good primary school and was well-known locally for being the school where the ‘nice families’ sent their children, so I felt as though I would be able to use my skills to benefit the early education of young children rather than just being a free childminder.”

After seven years of working in the nursery, Christine began to feel as though the school and its reputation was changing, and not for the better. She continued, “I know this sounds terribly snobbish but as a few new estates were built in the town I realised that the school was really going down hill. It was nothing to do with the children – I still loved working with them as much as ever – but the parents were so different. I felt that an increasing number of parents just couldn’t be bothered with their child’s education at all and more and more of them were rude. I also realised that too many kids were coming to school without any breakfast and so were getting difficult to teach.”

Even though Christine was committed to supporting the children and continuing with her vocation, she became so disheartened after a while that she began to dread going to work. She said, “That was a real turning point for me. I’d always really loved my job and relished the challenge of working with kids, but as more of my time was dealing with angry parents, or often parents who had no interest in their child’s education at all, I felt as though it was a different job to that which I trained for. Many of my colleagues felt the same but decided to stay to protect their pension, but I couldn’t have another 30 years of feeling like that – and maybe worse – so I made the decision to look for something else.”

With the challenging economic climate in full swing, Christine knew that finding a new job would not be easy. But as she was determined to address the issues that she was not comfortable with, she only applied to private nurseries. She added, “I know it’s unfashionable to say this, but I just wanted to work with kids who had the support of their parents, kids who would be encouraged to complete their homework when they got older and who wanted to learn. I know some teachers flourish in difficult circumstances but I had to accept that I was not one of them.”

Ready for a New Challenge

After a number of applications and a few interviews, Christine was offered a position at a private local nursery. Although a part-time position at first, the head teacher assured Christine that a full-time position was likely to be available within a few months, so she accepted the job and handed in her notice. Christine continued, “Part of me felt like I was ‘giving up’ and that I just didn’t ‘like’ the kids from the more difficult family situations. And I suppose that’s true, but I just couldn’t continue working in the state nursery any longer as it was making me feel stressed out too often. When I handed in my notice I was asked what the reason was and, as they knew I was initially going to a part-time job, it couldn’t be for the money. I told them the real reason and although I felt a bit guilty about it, they understood and knew I was telling the truth.”

As soon as Christine started her new job she found the stresses of her old job drift away. She concluded, “That’s not to say that there aren’t other challenges, after all, children are all individuals and just because I work at a private nursery it doesn’t mean that all the kids are like Little Lord Fauntleroy. But I do feel like I have more support and more time to actually ‘teach’ the kids – and that the parents are actually interested in what I have to say and not get all defensive as soon as little Johnny does something wrong.”

How to Handle a Child Who Gets Too Dependent