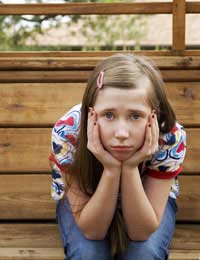 Mental health issues seem to be on the rise amongst young people in the UK. As recently as 3 years ago, the Office of National Statistics, concluded that as many as one in four 15-34 year olds committed suicide and it is suspected the number to has risen since then. It is estimated that in the UK, more than 850,000 children suffer from a mental health issues, indeed the Royal College of GPs report increasing numbers of youngsters, presenting with a range of anxiety related issues.

Adults are Missing the Signs

For sure, these kinds of figures are so shocking that one's natural response can be to feel overwhelmed and disempowered; after all, what can one person do against such a tide of suffering? What is perhaps more worrying, however, are the results of a recent survey which concluded that of the 2,100 adults who took part, one third were not sure of the signs for depression in children and even if it was suspected, would be hesitant about reporting it, in case they were wrong.

Professionals know that the detection of significant mental health problems in children is very often missed and that this can have devastating consequences further down the line. Those who work with children, however, are in a unique position to recognise when there might be mental stress going on and play a part in that person finding help. By taking time and learning to recognise the signs, children's workers can make a positive difference early on.

MindEd is a brand new initiative funded by the Department of Health which aims to provide adults who work with children and young people, the information, facts and advice needed in order to recognise mental health issues and be able to take action. The portal provides an interface by which adults can measure what they suspect against professional insight and thereby have greater confidence in dealing with symptoms of anxiety in young people.

The key point here is identifying that there may be a problem in the first place - especially when so much natural, perfectly healthy change is taking place in the lives of youngsters at the same time. It is possible, though, to learn what to look out for and to note any change in behaviour which might indicate cause for concern. Whilst there is no set list of criteria which amount to a mental health issue, there are nevertheless questions which can be asked and the answers to which can begin to draw a picture of whether that young person is having problems coping. Next to family, those who work with children and young people are amongst those who know them best and who are in a good position to understand their character.

Questions to Consider if Anxiety is Suspected

When working with a child whose behaviour seems out of sorts, there are some basic questions which can be asked to help identify a potential problem:

By noting answers to these questions and following up your concerns with more experienced colleagues, a path can be sought for carefully and sensitively dealing with the situation and for working out help for that young person.

Don't ignore the statistics; work with them to find solutions.

How to Handle a Child Who Gets Too Dependent

How to Handle Tantrums Professionally and Effectively
Share Your Story, Join the Discussion or Seek Advice..
I have 2 children they both have anxietiy and the never get changed in front of each other they are both boys and I have to take them out is most schools because they just lose their temper and a they have a sensory room each and that is where they can lose there temper
Borjha123 - 29-Jul-17 @ 10:56 PM
How timely your article is. Our Granddaughter (aged 8) is showing many of the signs that you highlight. We know the probable cause but feel powerless to do anything to stop it. You see 4 years ago we reported our concerns to social care who, at that time, were supporting her mother and half-brother. Even though they were aware that half-brother was displaying sexual awareness way beyond his 6 years at the time, which was later confirmed by a psychologist, and that a sexual predator was present in the wider family unit they preferred to label us as malicious and vindictive and when the matter was referred to court proposed a change of residency to mother. After 2 years of battling through the joke that is the Family Court a senior judge finally took heed of the psychologist and removed her from the care of her mother. However, somehow the mother managed to retain some contact under the guise of benefit to half-brother, the concerns were never properly dealt with and as contact has increased (mother is married now with 2 more children) mother is held up as a model by social care even though she has never undertaken any of the counselling recommended by the psychologist to deal with her own myriad of mental health problems. Social care are still involved in supporting both her and her son so we are very wary of involving them further. Granddaughter has been discovered at school distributing letters to her friends containing sexually explicit content, which she says her half-brother instructed her in. Granddaughter appears to totally trust her half-brother who is now 10 and a big lad for his age. We are increasingly concerned for her future well being and safety but what do we do?
adenuf - 15-Apr-14 @ 10:45 PM
Title:
(never shown)
Firstname:
(never shown)
Surname:
(never shown)
Email:
(never shown)
Nickname:
(shown)
Comment:
Validate: