Home > Case Studies > Why Working as a Mother's Help Suits Me 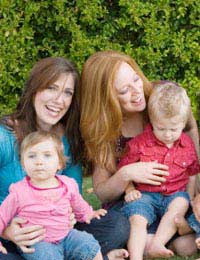 When all three of Jenny Donaldson’s children were in school full-time, she started to look around for a way to make some extra money. Her husband William was working as an accountant, but with five mouths to feed another income would come in useful.

Jenny didn’t want to work full-time, nor did she want to work outside of school hours. More importantly, she wanted to have all the summers off, as well as school holidays such as half-term.

That’s when she decided to become a mother’s help.

“I started after someone I knew from my son’s playgroup asked if I would look after her kids, then it all kind of took off from there,” says Jenny, who is 44 and lives in south London. “I have had several jobs as a mother's help, and they all came from word of mouth, really.”

Duties of a Mother’s Help

A mother’s help is not exactly an au pair, but not exactly a child-minder either. They often work at their employer’s home and, as the name says, usually they work in tandem with the mother, who is often at home as well.

The duties of a mother’s help vary from individual to individual, but they usually do a lot more than just childcare. While their primary duties are looking after children, they are also expected to do some light cooking – usually just the children’s meals - shopping and cleaning.

“A mother’s help is not a cleaner,” according to Tinies, the Childcare Experts, which helps families find mother’s helps. “But she will do ‘nursery duties’ i.e. doing the children’s washing and ironing, keeping their rooms tidy, clearing away the toys, cooking for the children and clearing up the kitchen afterwards.”

Most mother’s helps live in with the family they work for, and work up to ten hours a day. They normally are required to be at least 18, speak good English, and have either a basic childcare qualification or at least one year working with children. Some employers prefer that their mother’s helps have a driving licence, and/or speak a second language.

The pay a mother’s help receives varies from area to area. Live-in mother’s helps, who are often quite young, can get a weekly payment of about £150 - £300 in London (less in other parts of the country), while Jenny received an hourly wage. If a mother’s help is registered with Ofsted, childcare vouchers may be available that can help defray the cost.

Fitting in with Family’s Schedule

With three children of her own now aged 14, 12 and nine, Jenny was an unusual mother’s help. But she became one more than anything else because the hours fit in with her family’s schedule.

“I can effectively work around my own family, and choose my own hours. It’s like I’m working freelance, I can say when I am available and when I’m not,” she says.

“I don’t work school holidays and I can fit my working day with taking my own children to and from school.”

While nanny horror stories abound, Jenny says she has had only good experiences working as a mother’s help, which she has now been doing for just over six years.

“I enjoy looking after young children and usually have a good relationship with the mothers, which makes working a pleasant experience,” she says.

“I now work for Olivia, who has two children aged four and two. I have been with them since the eldest was six months old, and all in all it’s been a really nice experience. While my days can be tiring, I actually enjoy going to work in the morning.”

Jenny says that every day is different, which is one reason she likes her job. “A typical day for me now would be collecting the younger one from nursery and taking him to an activity like football. I’d then sit with him during that and then I’d take him home, or take him to the playground after nursery if the weather is nice.

“I often take the older one to nursery and as she’s only on half days, and we often go to her swimming lessons afterwards. I also cook the children’s meals, such as pasta dishes, fish pie or cottage pie.

“Sometimes the kids aren’t there and then I clean. So I will tidy their bedroom, clean it, sort out their toys, and clean their toys. They have a cleaner to clean the rest of the house; I only look after the children’s things.”

Often, Olivia is at home while Jenny works. Sometimes she is busy at the computer, or sorting out clothes for a women’s club sale, or perhaps doing something on her own.

“It’s kind of half and half. Sometimes Olivia will take the kids to their activities, or take them somewhere else. So when she’s out I do things at her home like cleaning or preparing, or sometimes I look after just one child so she can spend time with the other.”

During the school year, Jenny works for Olivia 20 hours a week, with no paid holidays, and often babysits one night a week as well. But the upside is that Jenny can take a holiday whenever she wants – unpaid, of course – and set her own hours.

“The best thing is that I genuinely like Olivia, as well as the children. We have a very good friendship and there is a strong sense of trust and loyalty between us. She has also always been very kind to my family and my own children.”

Before working for Olivia, Jenny worked for several other families, including a Brazilian one. “The Brazilians were kind of crazy, the children were aged two and five, and they didn’t speak any English. The older one was starting to pick up English, but not much, and I don’t have much Portuguese, so that was hard,” she says.

“I felt really sorry for the kids, especially when I babysat for them at night. At bedtime children always want their parents, it’s a really tricky time to look after children. These little children would want the security of their parents, and instead they’d have this mad woman who didn’t speak Portuguese. It was hard on them.”

No job security can also be an issue, according to Jenny. “Unfortunately, being a mother’s help means that your employer can suddenly turn around and say to you, ‘Oh, I do not need you anymore from next week,’ which I have had happen to me,” she recalls.

“One English family I spent six months with eventually decided to use their cleaner to look after the children, who was obviously cheaper than me, so I suddenly found myself in the position of having to look for another job.

“If you have a lot of bills to pay, the uncertainly can be very stressful.”

Now that Jenny’s children are older and the youngest one will finish primary school in two years, she is thinking of a different career path.

“My children are becoming slightly more independent, coming to school by themselves and doing activities on their own. So now I would like to do something more challenging than being a mother’s help.

“I am thinking of moving on, but I don’t know what I’ll do. I have a university degree in English Literature and French, so I think as soon as I have more freedom I’ll move on to something better.

“I just hope my next job will be even more satisfying.”

I Trained to be a Children's Drama Teacher: Case Study